We had the experience, but missed the meaning. 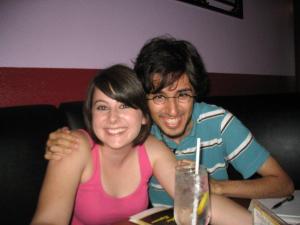 My plan to induce bizarre dreams appears to be working. I wouldn’t say I’ve had a top-ten, for-the-ages dream so far this year (like the “Oh-ye-Oh” dream or the dream about the prayer group in the spring of 2007, or the one I had last year about dandelion spores blooming into end-times novels that turned people into zombies [“I didn’t see that coming,” said Luis when I told him about it]), but I’ve had some pretty weird ones. On Saturday I dreamt I was imprisoned in a dream against my will. I was trapped in the snowy north in one of those mysterious houses where there’s always dancing. I thought we would all be trapped there forever. But then there was an explosion (I think a meteor might have struck the house) and the whole place turned over and everyone was fleeing into the frozen wastelands. In a final stroke of good luck, the magnificent bearded giant who was chasing me fell through a hole in the stairs and was trapped. He snarled at me in a menacing way—but in vain—as I made my escape.

Then this morning I dreamt I missed work and was hanging out with a small girl (she was only a foot or so high) made entirely of green china. Perhaps it’s because over the weekend I watched both the series finale of FRINGE and the Prisoner series finale—there was a moment towards the end of the last episode where Number 6 had joined forces with his old enemy, the midget butler, and the two of them were machine-gunning the whole Village while, overhead, the Beatles sang, “All You Need is Love,” and I said, “This is genius.”

It was a good weekend. As previously mentioned, I saw Heather at the library on Saturday, and also checked out probably a dozen books on subjects ranging from King Arthur (I finally acquired a copy of Le Morte d’Arthur), to Oliver Cromwell (two biographies, one of them by Belloc), to the British secret service, to of course scary utopias, my favorite subject.

I’ve finished chapter 1 of John Gray’s book, Black Mass: Apocalyptic Religion and the Death of Utopia, and he draws a devastating line stretching all the way from John of Leyden, the tyrant of Munster, through Robespierre and Hitler, to the War on Terror. I read some select passages to Heather. “Like the Anabaptists and other mediaeval millenarians,” he writes, “the Nazis were possessed by a vision of disaster followed by a new world. Seeing themselves as victims of catastrophes, they experienced sudden revelations that explained their sufferings, which they believed were the work of evil forces. They believed they had been called to struggle against these forces, to defeat them and rid the world of them in short, titanic wars. This millenarian syndrome of impending catastrophe, the existential threat of evil, brief cataclysmic battles and an ensuing paradise can be seen in many modern political movements (including the Armageddonite wing of the American Right).”

Then on Sunday evening Tineke sent me her blog post, and something in the style of her writing (its neatness and precision) reminded me of Bethany’s writing, which led to a violent eruption of despair and sorrow. I hadn’t felt like this in probably a month, and I began to wonder if perhaps it was more than just “busyness” that had kept me from responding to Josh Wright’s and Rachel Lewis’s most recent emails for three weeks. I suddenly felt again that sick, shivery feeling that had been my perpetual dwelling in the weeks before I moved into the office. I remembered how any time I would try to read The Final Quest—or went to my Gnostic Bible study—I would be immediately physically ill for the rest of the day, feverish, vomiting, and nauseous.

I have a new theory. The first couple of times this happened, I suspected—as did Luis—that I was having a nasty physical reaction to the presence of Gnosticism (for Rick Joyner is very much a modern Gnostic). At this point I hate it so much that to be confronted with it, head on, is a debilitating experience for me. And while I still think that is partially true, I believe there is more to it. Because for almost a month I was able to avoid the recurrence of sickness, until over the weekend I allowed myself to rightly mourn for Bethany again. I think the reason why, in February, I was perpetually sick is because I was knee-deep in the blood and debris of my memoir and having to face the appalling repercussions of these mystical, anti-world heresies on Bethany’s life.

When I talked with Heather at the library on Saturday, she told me she’s worried that some of our fellow ex-Group members have managed to avoid facing the ways their own thinking led them to be in a cult, by placing the blame entirely on Tyler. And of course that’s a beginning, but it’s not enough. Some of our old friends have expressed concerns about the things I’ve said on Facebook. They say I’m being too intellectual and asking too many questions. They’re worried that I’m going to leave the faith. “I told them, ‘First of all, it’s not wrong to think,’” Heather told me. “‘Second, God gives us the freedom to question; and that can actually strengthen our faith.’”

One of the books I checked out that day, a book about dystopias in popular culture, talks about the elements that go into a tragedy. A real tragedy holds up a mirror to the audience and shows how the culture out of which the heroes emerged bears a lot of the blame for what went wrong. To be sure, they were done in by their own choices as much as by anything else, but to blame Romeo and Juliet alone for their violent end would be missing the point.

Historians recently announced that the Holocaust is actually far worse than we ever imagined—where they expected to find no more than 7,000 labor camps in all Europe, they found 42,500. What this means, according to some, is that everyone in Germany had to have known what was happening. Everyone was responsible, because everyone knew.

But I think you could easily study the Holocaust and Nazi Germany and miss the whole message. If you come away from that study with only a determined awareness that killing whole groups of people is wrong—well, that’s commendable, but it’s not enough. This was already beginning to happen at the end of the Second World War. “We had the experience,” wrote T. S. Eliot in 1945, “but missed the meaning.” Hitler was held up as a monster, “painted upon a pole,” a caricature of a tyrant, onto which the populace could pour out all their guilt and despair without having to examine, at any great length, the darkness of their own hearts. It’s convenient, in a way; convenient, and largely bloodless. A single man is raised before the crowd, and onto that man is placed the full weight of sin. The mystery of iniquity—in all its dark facets—begins and ends with him.

What it is, is a kind of scapegoating, one that we’ve been doing throughout history. Today, we’re doing it still.

One thought on “The Scapegoat”