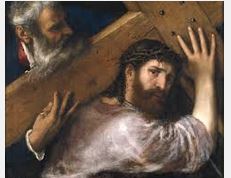 “He was oppressed and He was afflicted,

Yet He opened not His mouth;

He was led as a lamb to the slaughter,

And as a sheep before its shearers is silent,

So He opened not His mouth.
“He was taken from prison and from judgment,

And who will declare His generation?

For He was cut off from the land of the living;

For the transgressions of My people He was stricken.

“And they made His grave with the wicked –

But with the rich at His death,

Because He had done no violence,

Nor was any deceit found in His mouth.”

Yesterday during Bible study, Rich talked about the passage in Matthew 16 about “taking up one’s cross.” He said, “We need to forsake the life of worldly pleasures. Being satisfied with the world and the pleasures of the world. If a soul does not permit himself to suffer now, he will suffer later. If a person refuses to deny the pleasure of his own soul, there will be weeping and gnashing of teeth. The Son of Man is coming in the glory of His angels. Some will reign with Him. Some will not.”

I didn’t entirely see how he was getting all this out of that passage, so I drew our attention back to the story a few verses earlier where Peter rebukes Jesus for saying He has to die. “Get behind Me, Satan,” He tells him. “For your mind is not set on divine things, but on human things.”

“Peter was upset with Jesus,” I said, “because he wanted Jesus to ride into Jerusalem as a conqueror and destroy Israel’s enemies. He wanted to see Him brandishing a sword in His hand, and Jesus said to him, ‘That’s not who I am.’ And I think sometimes it’s so easy to get confused about the real nature of Jesus, and what He’s telling Peter, what He’s telling us, is, ‘Look at the cross. That’s who I am.’ He’s up there, nailed to a cross, bleeding to death, barely able to breathe and in His deepest agony He cries out, ‘Forgive them!’ He was helpless, defenseless. He didn’t lift His hand to strike a single person. He didn’t slay His enemies, He blessed them as they took His life.”

There was a brief silence after I said this, and then Josh said, “But He’s GOING to, when He comes again!”

“Josh,” I said, “your mind is not set on divine things, but on human things.”

“But the Bible says He’s going to trample them like grapes! I just picture them being squished!”

“Of course you do!” I replied. “Don’t you love that? And you’re making the exact same mistake that Peter made in this passage. We need to read the whole Bible through the lens of the cross. The cross is God’s ultimate self-revelation.”

“But what does Revelation 1:1 say?” said Josh. “The REVELATION of Jesus Christ!”

I nodded. “And it needs to be read through the cross.”

“But that’s what it says,” said Rich, intervening. “Jesus is going to march through the land. His garments will be stained red, why? Because of the people He’s killed.”

“Yeah,” said Rich. “It symbolizes what He’s going to do!”

Then Josh read a passage from Isaiah 30, and then I read the story of the crucifixion in John 19, and then Josh read Isaiah 63 as Chay dozed on the couch. “Josh,” I told him finally, “it’s so hard to be mad at you. Every time I try to argue, you’re such a nice guy, I can’t do it. And I think if Jesus actually came down and started killing people with His bare hands, you would be horrified, because you’re a good person.”

Who is Jesus to you? Do we diminish His character by seeing Him through the lens of the Gospels? Is He a warrior king, or a prince of peace?