This week I’m very excited to announce that one of my articles is being featured in The Atlantic online.

“Seven Signs You’re in a Cult” gives an overview of my time in Tyler Deaton’s prayer group, beginning in 2005 when I met him and Bethany Leidlein and concluding with Bethany’s death in Kansas City in 2012. It was an extremely difficult piece to write, because reliving the emotions associated with that period in my life, and losing her especially, is never easy. There were times when I thought it would never be finished, but I’m pleased with the response it’s been getting.

Though some of the group’s former members remained part of the prophetic movement, I mentally checked out after Bethany’s death. I joined a church in a liturgical tradition and formed a new circle of friends, many of whom had also left IHOP. I began to rethink my views on homosexuality and other marginalized groups. I also underwent counseling with IHOP leaders. During this process, I tried to renounce what I saw as harmful beliefs, including the conviction that our group had been messengers called to battle the forces of the anti-Christ. To my surprise and dismay, they told me, “No, Tyler was right about that. You need to pray out loud for God to show you your calling.”

In other words, our group’s biggest crime wasn’t an excess of zeal—it was not being zealous enough. It seems to me that our community was not exceptional, given the high-intensity spiritual environment we were part of. Tyler was not an isolated individual, but the product of a phenomenally twisted system.

Since I’ve had so many new visitors to my site this week, I thought I would collect some of the most important news articles and blog posts written about the Bethany Deaton case. Several of these posts were written by close friends of mine and lay out the complexities of the religious environment we were a part of, better than I ever could. I’ll also include a few of my own posts for easier reference, and will continue to update this post as more information becomes available.

Rolling Stone: “Love and Death in the House of Prayer,” by Jeff Tietz

This long and hard-hitting journalistic expose from January gives a crime reporter’s perspective on the development of the prayer group, the personalities of Bethany, Tyler, and Micah, and the “twisted system” of a particular strain of American religion.

Some of Bethany’s roommates in the women’s house noticed a change in her as soon as she got back from her honeymoon. She was “confused” and “uneasy.” She’d moved into Deaton’s basement room in the men’s house, but within two weeks began spending one or more nights a week at the women’s house. Sometimes she stayed several nights in a row. “I just need a little space,” she’d say, or, “I just feel too controlled.” But she wouldn’t elaborate. No one had ever seen her so listless and depressed. She could not be consoled.

Deaton, and therefore the group, considered Bethany’s distress to be her own problem. She was exhibiting inappropriate “resistance” to her new husband. She was restless at night, a former roommate says, which bruised his prophetic sensibility and cost him sleep. Since Bethany couldn’t bring herself to blame him, she instead blamed some amorphous sinfulness in herself. Worried that she might be inclined toward repression and avoidance, Deaton instructed her to meet with Moore in the mornings so that Moore could ensure she was facing her problems.

The Cosmic Cathedral: “What Rolling Stone Didn’t Tell You About Tyler Deaton”

Blogger Kendall Beachey, who spent four years with Tyler at IHOP University and became one of his good friends, takes a fresh look at the case and assesses the available evidence to try and determine who was ultimately responsible. Most importantly, he raises the question, “Who created Tyler?”

The idea of getting ready, physically and emotionally, was not a stretch for Deaton or his group. Their environment conditioned it, and if other Bible studies merely went through Bickle’s Seven Commitments of a Forerunner again, while Deaton’s sweltered in the Missouri summer sun, his group did not seem odd in the larger context, just more devoted to the belief we had all been told to embrace. 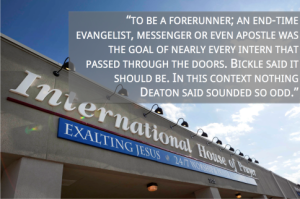 Also be sure and read his post, “The Tyler I Thought I Knew”.

The Cosmic Cathedral: “Babel, Pentecost, and The House of Prayer: My Time at IHOPKC”

In response to the above, blogger Gary Wallin tells the story of two years living in what he considered a high-pressure religious environment, in which students were chastised for wanting to become architects and stories of angelic visitations were used to shut down discussions.

See also, “You Are Bound to This.” And for a more scholarly assessment of Tyler’s basic theological framework, read this article by Matt Hartke: “Montanism Revisited: A New Controlling Narrative.“

Sketches by Boze: “The Night We Were Persecuted”

In this essay from February I look back at a night at Southwestern in fall 2008 when Tyler Deaton gathered all of his followers in a single room and told us we were facing persecution and demonic attack.

Sketches by Boze: “The Scariest Thing About My Abuser”

Building on Kendall and Gary’s earlier posts, here I recount the story of undergoing exit counseling after Bethany’s death with a Charismatic ministry and being rebuked for trying to renounce the lie that I was called to battle the Antichrist. “If Tyler had had a large enough ministry, people wouldn’t recognize his abuses even if they were all written down.”

And finally, check out this response to my piece in The Atlantic by John Hawthorne, a professor of sociology at Spring Arbor University: “Boze Herrington’s Heartbreaking Piece in the Atlantic.”

6 thoughts on “The Bethany Deaton Case: A Blogging and News Roundup”