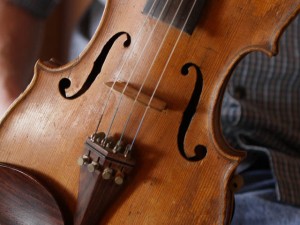 Was a man in white who showed up one night in the town of Abilene.

For Fernando McGraw of Statler Hall, it was the best day of his life

Two hundred guests merrily processed behind the bride and groom

With hurrying feet through the rain-filled street to Winchester’s Saloon.

Said, “I’ve played my best, let’s give it a rest and everyone go home.”

A man of the cloth, he feared God’s wrath if he kept not the Sabbath day

But with angry eyes and wild cries Marie ran up on stage.

“Oh, no you don’t!” she hollered out, her face with fury marred

“Before anyone goes, you pick up that bow and play your fiddle hard.”

But refusing to play, he went on his way and she whispered to herself,

“On the grave of my mother I’ll find another, though he come from blackest hell!”

Just then the man in white swept in, none knew from where or how

He played that fiddle with lightning speed, and fire flared from his brow

And with riotous delight they danced that night in festive Abilene.

Weary, Fernando paused to rest, but was suddenly back on his feet

Hard as he resisted, his legs insisted on tapping the fiddler’s beat

“We have to leave,” he told Marie, and together they searched for the door

But the exits were gone, and the fiddler played on, and no one left the floor.

The faster he played, the faster they danced, and none could break the spell

The dancing went on without a song, and when the police came at noon,

But of all those tales and all those hells, the worst there’s ever been

Was the night when the devil led the revels in the town of Abilene.

One thought on “Thirty Days of Poems: The Fiddler of Abilene (Day 5)”