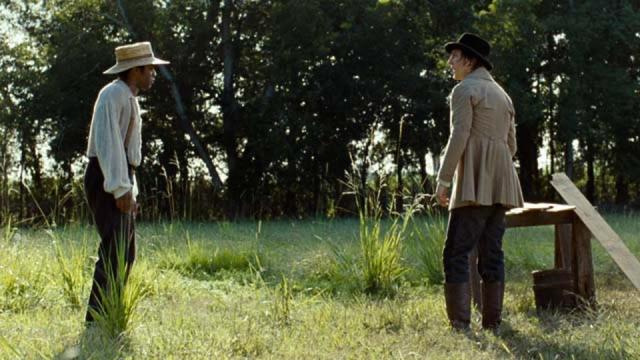 There’s a scene in the movie “12 Years a Slave” where Solomon Northrup – a real man who was taken from his home in New York and enslaved on a Louisiana plantation – has an argument with his racist overseer, John Tibeats.

Tibeats comes over to inspect the house he’s building. “I thought I told you to commence puttin’ on the clapboards,” the overseer says angrily.

“That’s what I’m about,” says Northrup, motioning to the clapboards.

Northrup points at the keg of nails standing beside him. “Well, so I did.”

Viciously, Tibeat kicks in the clapboards. “God damn it,” he yells, “I thought you knowed somethin’!”

“I did as instructed,” says Northrup. “If there’s something wrong, it’s wrong with the instructions!”

But Tibeat refuses to listen. He orders the once-free man to strip his clothes and attempts to beat him with a whip before hanging him by his neck.

This moment so powerfully demonstrates the dangers of being in a place where a hateful and irrational person is given authority over you. Northrup is right, but it doesn’t matter. The overseer doesn’t care whether he’s right or wrong; he hates him simply for disagreeing.

The scary thing is, his hatred is SO strong that literally nothing the slave says will ever be able to change it. 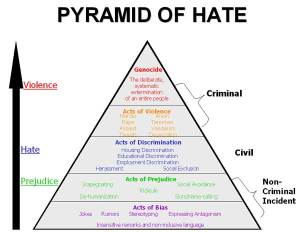 if we look again at the Pyramid of Hatred, we begin to see the truly disturbing thing about mindsets and theologies that consider it “good” and “Christian” to hate another human being. Because the very first level of hatred is insulting and slandering others. And already on this first level we’re having to defend our integrity as people against those who will NOT listen to us.

They say, “I’m just speaking the truth. It’s in the Bible.”

But if, like the overseer who beat Northrup, they’re ALREADY not listening on the first level, if the Scriptures already have no authority over them (even though they pretend that they do), how can we ever get them to listen when hatred becomes systemic and reaches the highest levels – vandalism, murder, and genocide?

We have to face the horrifying reality that the most devastating and dehumanizing acts of violence are made possible when we refuse to engage our enemies as people and treat them with the level of respect and care they deserve. They’re people. They matter. If we say we don’t see it, it’s because we choose not to.