Because our mothers lied to us and nothing comes easily in this grim world, there are times when life presents us with impossible choices. Should I save the dying man on the beach or venture deeper into the forest to explore the mystery of this tropical island? Should I trust the foxes, who have guns, or the owls who are wise and frightening? Should I read classics or contemporary young adult novels? This month it is young adult novels.

paperfury’s blog and twitter
One of the eternal truths about twitter is that while there are millions of accounts, there are only a handful that are really worth following. Cait @paperfury is one of them, especially if you want to read more contemporary fiction but don’t know where to begin. She’s read thousands of books and has thousands more in her to-be-read pile. She reviews them on Goodreads and on her blog, which is indispensable and where she rhapsodizes about important things like building yourself a book igloo and eating large amounts of cake. Set politics aside and experience twitter as God intended it: enthusiastic ravings about books, pastries, and manor houses with spiral stairs and spinny ladders.

It is a truth universally acknowledged that a girl doesn't want a husband. She wants floor-to-ceiling bookshelves and a magical cape.

The Crown’s Game [Evelyn Skye]
I have made no secret of my love for War and Peace and nineteenth-century Russia generally. So when a certain ecstatic book fiend recommends a work of historical fiction set in St. Petersburg, but with magic, you can be sure I will read it. This debut novel has a whiff of Jonathan Strange & Mr Norrell about it, as two young enchanters compete against each other to perform increasingly elaborate acts of magic in the hopes of winning the tsar’s favor. That’s the plot, but the real reason you should read it is because it is impeccably detailed and authentically Russian in the way that only a book filled with vatrushka pastries, colorful yurts, and taverns owned by brawny Kazakh fellows can be.

A Darker Shade of Magic [V. E. Schwab]
Umberto Eco once wrote of Casablanca that it was as if all the clichés got together and staged a joyous reunion. That statement has been applied to Harry Potter and is also true of this book, the first in a trilogy, which is sort of the platonic ideal of what an epic fantasy can and should be. Do you like stories where an unsuspecting Muggle ascends a flight of stairs and encounters a dangerous man possessed of bizarre magic? Do you like chase scenes where a man and woman who have just met must flee together through a city where their own faces are staring back at them from every screen? Then you will love this book. You will read it with shining eyes and immediately demand a sequel and a movie. And you are in luck!

The Serpent King [Jeff Zentner]
“Ah,” you might say on learning that this novel, one of the most acclaimed of last year, is about snake-handling Pentecostals in the American South. “An Issues Novel.” And it’s true that some issues are addressed! But Zentner weaves his exploration of poverty and toxic religion around the lives of three likeable characters in their last years of high school: Lydia, a stylish blogger and fashion icon with a talent for manipulating people and getting her own way; Dill, whose pastor father is in prison; and Travis, a socially awkward lover of fantasy novels who carries a dragon pendant around his neck like a teenaged, American Pierre Bezukhov. My one complaint about this novel is that it is not, sometimes, much fun? Like perhaps you would prefer a more lighthearted novel by Charles Dickens or Lemony Snicket? Yet the characters will keep you reading through to the inevitably tragic denouement. 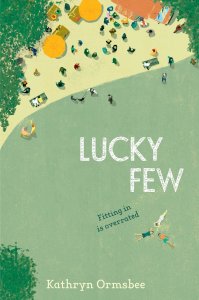 Lucky Few [Kathryn Ormsbee]
Ever since the release of Richard Linklater’s Boyhood I have been whispering to myself, “Who will write the book of my heart: a contemporary young adult novel set in Austin, Texas?” It is a well-known fact that Austin is one of the greatest cities in the world, along with Edinburgh and Cabot Cove. And Kathryn Ormsbee has written that book. Sometimes you tire of reading about winter palaces and cobblestoned streets and yearn for a story set closer to home. Sometimes you want to read about Barton Springs and I-35 and idling sedans and foil-wrapped avocado tacos and the smell of gasoline on a muggy spring day. Ormsbee delivers all of that in a story about three Texas teenagers who are trying to fake a boy’s death in 23 different ways. The result is an empathetic and endlessly detailed jewel of a book that compares favorably to the best novels of John Green and Rainbow Rowell. She has another YA novel coming out this summer, Tash Hearts Tolstoy, about a young vlogger who’s obsessed with Tolstoy. Can you guess who will be FIRST IN LINE to read that book on the day it comes out? I, reader, it is I.