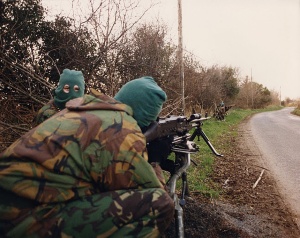 In the 1960s and ‘70s, Northern Ireland was a nation at war with itself. Loyalist Protestants, seeking integration into the United Kingdom, took up arms against the Catholic republican majority. There were car bombings, gun battles, and random acts of butchery. Demagogues like the Reverend Ian Paisley fueled the fires of resentment.

The song “There Were Roses” by folk singer Tommy Sands tells the true story of a tragic thing that happened to him. Growing up in the townland of Ryan, his two best friends were Allan Bell, a Protestant, and Sean O’Malley, a Catholic. Allan loved to dance; Sean loved a girl named Agnes. Some nights they would stay up late playing music. When the noise of guns disturbed the tranquil peace of the countryside, they swore their faiths would never come between them. END_OF_DOCUMENT_TOKEN_TO_BE_REPLACED

The hope of their nation. The brightest young women Nigeria had to offer. They were going to be teachers, doctors, lawyers, politicians. They had dreams of leading their country out of the darkness.

But that’s not how it’s turned out. They were carried away. Awoken in the middle of the night to the noise of gunfire, forced out of their beds by sweaty, dangerous-looking militiamen, with AK-47s primed at their backs they disappeared into the night and haven’t been seen since. The darkness swallowed them up.

It swallowed up the hope of Nigeria.

The hope that a woman could get a real education and grow up to be something other than the twelve-dollar bride of a tribal warlord.

The hope that a country racked by violence and religious militancy could look towards the future and begin to heal itself.

Those dreams were taken away, into the jungle where three hundred brilliant, talented women were tallied up and sold like the cheapest of human commodities.

And as I join with people of faith throughout the world tonight in praying for their return, I wonder why I live in a world where these things do happen, why they seem to happen so often. Why men with Bibles and Korans and machine guns are trying to destroy everything good and beautiful in this world. Why they throw acid in the faces of little girls who have the courage to attend school and determine the course of their own lives. Why they shoot strong women, brave women, in the back of the head, for the crime of being strong and brave.

I keep thinking of the lines to an old song we used to hear on Christian radio growing up. Tonight the lyrics resurfaced, more poignant and powerful than ever:

How can I explain the fear you feel inside?

For you were born

Into this evil world

Where man is killing man

And no one knows just why

What have we become?

Just look what we have done

All that we’ve destroyed

You must build again

Yes, some humans have made this world a truly terrible and hellish place to live in. We have to do better. We have to create a better world for our children, a world not characterized by the deafening roar of bombs and ceaseless cacophony of bullets but by the quiet hum of students thinking, reading, writing poetry, creating model UNs—free to dream and discuss and flirt and fight and fall in love in peace and safety.

A world where the “threat” of peace doesn’t scare us.

A world without drones or guns, where the state no longer wields the grisly instruments of torture and death.

A world where women are not seduced and exploited by twisted religious perverts—in America or anywhere else.

Where they can study astronomy and biology and literature and math and politics without fear of reprisals from men bearing scriptures and machetes.

Where they can be anything they want to be, live any dream they want to dream, and no one can ever again take those dreams away from them.

So many have been hurt; so many have died. Tonight I pray against hope for the return of these young women, even as I mourn the possible loss of all they might have become. But I realize that in a much larger sense this is just another tragedy in a world full of them. It seems like every time the world has a chance to go right, someone comes along to wreak harm and destruction. And no one knows why they do it. Maybe it’s the twisted feeling of control and power it brings them, or maybe they really do just want to watch the world burn.

There are times like tonight when I feel scared and overwhelmed, just one feeble voice in the darkness. But this experience has galvanized so many, and I know I’m not the only one who thinks this world could be so beautiful. There is much to rebuild. But as hopeless as it seems, I haven’t given up yet. I hope you won’t, either.